The Life is in the Blood

What hath Christ to do with Dracula? Possibly more than you think.

“The blood is the life!” Dracula, Chapter 11

It’s October, and Halloween is right around the corner. So, now is a fitting time for the subject. I’ll admit it, I enjoy vampire stories. Not the new stuff where the vampires are good guys or love interests for middle school girls (these modern romanticized versions are a perversion), but I mean real vampire stories where they are demonic embodiments of corruption. Many cultures have vampire type figures of one sort or another in their folklore. It is the western adaptation, which began in the 19th century, of the eastern European vampire that I’m going to be talking about.

Classic literature of this type would include:

“In the morning she never came down until long after our family prayers were over… at night she never left… to attend our brief evening prayers. If it had not casually come out in conversation that she had been baptized, I should have doubted her being a Christian. ” – Carmilla, chapter 6

Now, most people are familiar with the aversion vampires have to holy objects such as crosses, but the religious symbolism runs much deeper. The first thing to notice about the vampire is that, in spite of the fact that they are dead, evil and utterly corrupt (possibly even worm eaten), they have a seductive attractiveness. They possess a sort of magnetism. Like a moth to flame, the victim is drawn to the vampire. The ugliness of evil is hidden by the glamor, a metaphor for temptation. As everyone knows the vampire is repelled by things associated with Christ and the Church. Crosses, holy water and other sacramentals for example. To defeat them they must be utterly destroyed with a stake through the heart, by beheading or exposure to daylight. Defeating the vampire by exposing him to daylight is notable. Twelve step programs such as alcoholics anonymous begin by having people fess up and admit to the thing sucking the life out of them, bringing it out into the light. Exposing sin and evil takes away its power. Exposing sin and evil to Christ, the true light, destroys it. (John 3:19-21, Eph. 5:13, 1 Jn 1:7)

““My friend- Welcome to the Carpathians. I am anxiously expecting you. Your Friend, Dracula”…”

“…When I asked him (the landlord) if he knew Count Dracula, and could tell me anything of his castle, both he and his wife crossed themselves, and, saying that they knew nothing at all, and simply refused to speak further.”  – Dracula, chapter 1

It seems to me that our conception of the vampire is heavily influenced by Bram Stoker’s developments of the tradition in particular. The creation of Dracula really fills out and fully forms the vampire legend in the west. He completes what the 19th century gothic literature tradition had begun. One could argue that, his work bridges a gap between the genres of gothic horror and early science fiction. Interestingly he utilizes a balance of modern science and religion. He has vampirism transmitted like an infection. His character Professor VanHelsing (the vampire hunter) is, at the same time, scientific and devout. He uses both blood transfusions and also crosses and sacramentals in his battle against Dracula.  Unlike other characters, the tension between modern scientific inquiry and faith is absent in VanHelsing.

“Taking a crucifix from her neck offered it to me. I did not know what to do, for, as an English Churchman, I have been taught to regard such things as in some measure idolatrous, and yet it seemed so ungracious to refuse an old lady meaning so well and in such a state of mind. She saw, I suppose, the doubt in my face, for she put the rosary round my neck, and said, “For your mother’s sake,””– Jonathan Harker in Dracula, chapter 1

It is important to realize the context in which Stoker introduced his novel. Dracula was written and published in late 19th century England. This was a protestant and modern (rationalist) context. His audience would have regarded many of VanHelsing’s weapons against Dracula as superstitious. (Note- Stoker clearly gets a few things very wrong.) In the novel, Dracula comes to England, and it takes a foreign Catholic to drive him out. One gets the impression that Stoker is playing off some sort of underlying anxiety, that science and reason may not be our savior. Taking a closer look at Count Dracula, let’s examine the connection between the vampire story and a Christian worldview.

So, what hath Dracula to do with Christ? Well, he’s an anti-Christ, thoroughly satanic. Where Christ generously gives his blood to be consumed by the faithful unto eternal life, Dracula takes blood from his victims drinking it to an eternal living death. Where Christ rises from death as the true light which has come into the world (think of the Easter vigil and its candle), Dracula rises from the grave in darkness. Dracula is a noble and a lord of darkness, while Christ is Lord of glory and light. Christ gives life, Dracula takes it. 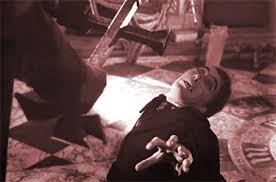 The vampire story which has come into our western tradition, having its roots in Byzantine Christendom, is at its core Eucharistic. The dark evils of prince Dracula are a satanic mockery of the Eucharist. The Eucharist is the marriage supper of the Lamb. The Church is united to Christ mystically through this supper. Through the Eucharist the Church, as bride, receives into herself the bridegroom. The two are united and become one. The bridegroom gives himself freely and unselfishly, and the bride receives him with love. The result of this is new life. In contrast Dracula (who prefers virginal female victims) takes forcefully for his own satisfaction. If he chooses, he will force his victim to consume some of his blood which will cause them to become his undead brides.

Science fails in this story; the blood transfusions slow, but cannot stop, the infection of vampirism. Pagan superstition fails; garlic deters, but cannot stop, Dracula. Even the sacramentals of the church only serve to keep him at bay. It is the Blessed Sacrament, Christ himself, who causes Dracula to flee from England.

It is a reflection of a shift in culture that recent vampire stories have had ‘good’ vampires. We are now living in a world strongly influenced by post-modernism. Postmodernism is shot through with philosophic relativism which denies the existence of absolutes or objective truths. The one and only absolute for the postmodernist is that ‘there are no absolutes’. Since everything is relative in this system, logically, what you say is evil is for you but not necessarily for everyone. This is convenient for the postmodernist since he can freely give in to his favorite sin. All the self-righteous and intolerant lecturing from secularists about tolerance and not being self-righteous comes from this mushy way of thinking. So we see this philosophy reflected in the notion that there are “good vampires”. “Oh that cute pale undead boy over there is just misunderstood… and, he’s oh so dreamy”. No, silly girl, he’s a devil, and we ought to stake him back to hell, posthaste! 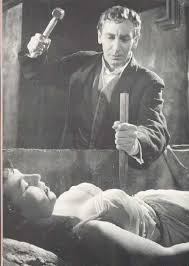 [Note-Be warned, if you are going to read the book Stoker has VanHelsing using the Blessed Sacrament it in a sacrilegious way. No true Catholic would do what he does. Clearly Stoker didn’t understand “indulgence” or simply misrepresented it. An indulgence is not a permission to sin.]

1 Response to The Life is in the Blood